It feels too good to betray everyone's expecations, so I'm gonna have to expand my styles.

I really like the comment someone left before the authors were revealed of "it's a woman's song." I make woman's songs. Thanks in advance.

This event had the sort of fun of taking part in a costume party. I'm still baskin' in the afterglow...

Please offer your support to Superbly-Dressed Lady as well.

RT @_yunonno_a The change in impressions of OSTER-san - Vocaloid producer, amusin' lady on Twitter, video creator knowledgeable about math and space, furry-loving artist who can sing, Vtuber, gamer dedicated to parries - is absurd.

Colorless Nameless Fest is over, and now Zundamon NEUTRINO is here. Amazing how music just won't let me go.

This is my first attempt at a genre that's not my main focus, so just getting favorable views on it is seriously a huge success... I'm glad I took part...

A summary of my thoughts having taken part in this project. 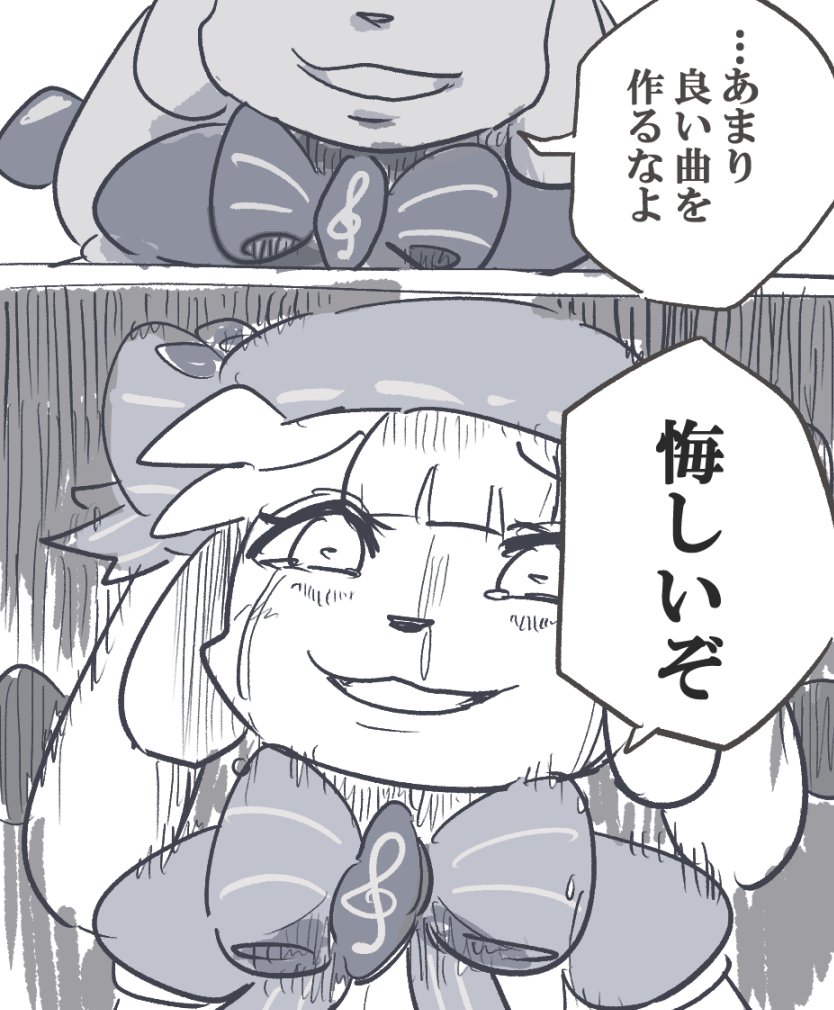 2007 OSTER song: "Dye everything up to my fingertips your color"
2022 OSTER song: "Suck it all down to the marrow"

[Retweeting Malzeno time attack video] Getting excited by how people who followed me due to this project and go to my YouTube will see this as my latest video.

But really, I'm shocked how many people there were telling me they're glad they got to hear my song, I feel like I'm a god... Just a little old middle-aged gamer like me..........

Being given additional work as a badge of honor for guessing right, a microcosm of Japanese society.

RT @crab_kanikani [Screenshot of their Marshmallow guessing Yummy-Yummy Girl being shown on stream; "a different tone than usual, but parts have an unconcealable OSTER-smell"]
And so, OSTER project Werewolf ends in a win for the hunters. Thanks for the match! :trophy: :trophy: :trophy:
I was made an honorary moderator as a reward, woohoo! (???)

I'm all excited by the festival, so I'm talking a lot about music, but be warned that I'm just a middle-aged gamer who's good at composing.

These two are the winners in my heart... Overwhelming quality.

[Retweets two Yummy-Yummy Girl fanarts in the #ColorlessNamelessMuseum tag] In truth, it did get drawn in the Colorless Nameless Museum... Grateful... Grateful...

This is the result of making a young-person-esque song!

Thanks for the stream!
And with that, the song I submitted was this one! :clap: :clap: :clap:
Congratulations to those who guessed right! :party popper:
And thank you for making a guess either way!
Yummy-Yummy Girl / Hatsune Miku #ColorlessNamelessFest

If you absolutely need to know right now, go look on the spoiler sheet on the official account.

The authors have been officially announced, but it's set up so you won't know unless you actively look it up, so I'll be announcing it on my stream. :folded hands:

Have you no regrets for the Colorless Nameless Fest?

Nice to Meet You-san / flower
Colorless Nameless Fest, a world where a song like this only has 3000 views.

Look forward to whether someone got it right or not.

The authors reveal is today, so I'm aiming to stream at a good time after 8 PM. I'm still accepting Marshmallows, so by all means.

Perhaps I haven't listened to too many songs due to not wanting to accept the fact there are lots of people good at composing...

Are there this many people who're good at composing in the world?

Listening to Colorless Nameless Fest songs predicted to be mine, I'm like "are they stronger than me?"