If I draw the fanart myself, I can see it endlessly.

I can draw Tesroset without using a reference now. (not saying I will draw them without a reference)

I have a report. I'm currently brushing my teeth. This ends the report.

I want to make reports like 500 times a day.

It went up by like 5,000 people in a month, it's seriously nuts, grateful, thanks, thanks so much, the three stages of gratitude.

But when I try to remember, my heart can't hold it all and it feels like I'm gonna go nuts, so I always put the lid back on. Heheh.

Of course, it was 13 years ago, so I feel nostalgic, but it also feels like it was yesterday, and I can remember it feeling fun and exciting and scary and harsh and regretful and making songs in mad fervor relatively clearly.

[Re: VOC@LOID in Love's 13th anniversary] With each year this day comes, there's more weight to the lyric "I don't want you to forget the day I came to you"... To think I'd develop such strong feelings about a line I just thought up on a whim back then... Life is so nonsensical.

I fit some rings.

Haven't touched ukulele lately. At this rate, I'm going to end up as a person who was satisfied just buying a lei and a Hawaiian shirt...

Am I just going to make "wait a mocha" an established thing at this point????

I can only draw incomprehensible art... 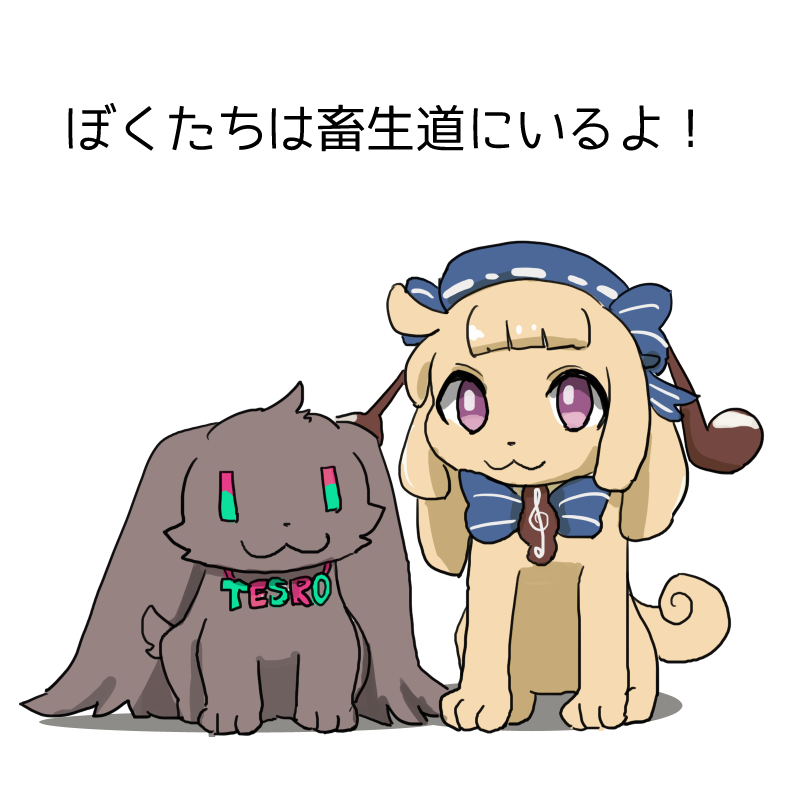 ["We're in the Animal Realm!" Reference to a viral tweet of a photo from a book on Buddhism, with some pets staring at the camera and that caption.]

I wanna be able to draw Roset-chan cutely, y'know???

Drawing dumb manga is too much fun. (too many fun things to do)

Twitter is brutal for cropping the thumbnail to show the punchline.

I drew a manga. #TesrosetArt 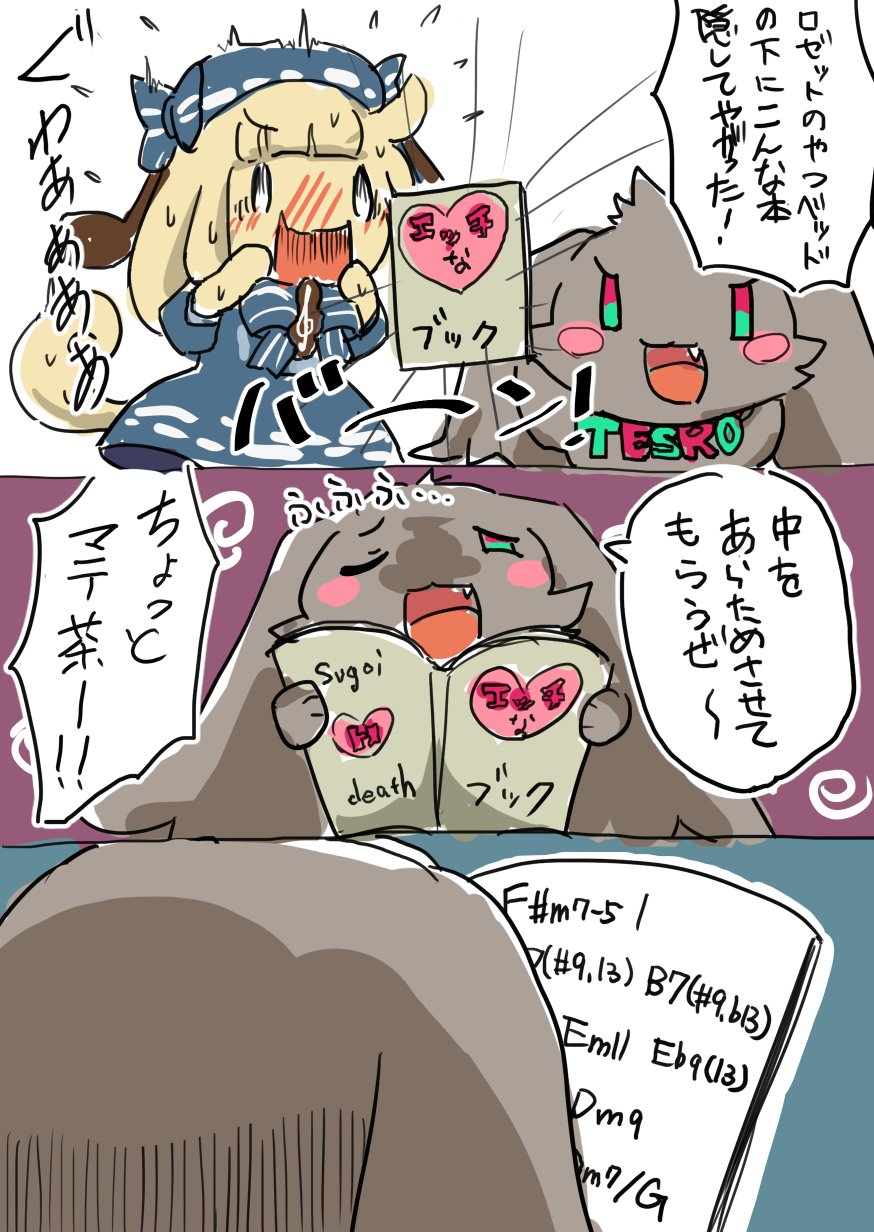 Fast forward to the present, and I feel like I'm able to pick appropriate chords for every moment out of countless choices, keeping control over the mood of the entire song...

I still vividly remember how when I made Grumpy Waltz, the chord variations I knew were so limited that I was worrying I could only make very similar-sounding songs. I've always been thinking about how I can "stop being normal," not that this song was a breakthrough in that regard or anything...

When I listen to an old song of mine after listening to a recent one, the sound is so straightforward I cry... I can't go back to that time anymore...

It gets into feeling territory, so if I find something sexy but someone else doesn't, it just means we don't have the same idiosyncrasies, which leaves no room for explanation... No matter how much you extol the deliciousness of veggies, it isn't going to change the mind of someone who doesn't like them...

I want to explain what's "sexy" when it comes to music, but I can't think of an explanation as comical as "panty shots are getting an unintentional glimpse of something you just barely can't see, etc.", so I can't explain it.

Guess who got their title typoed by NicoNico News? This gal.

I didn't notice since I only watched the video, but that's not my song... LOL

I want the protagonists of my song's lyrics to be a mess in mind and body. I'm such a mad scientist, forever observing chemical reactions in the laboratory known as adolescence...

And Love Prison is a wholesome song about spending all day digging a tunnel with uncontrollable enthusiasm.

Love Ward is an extremely wholesome story about gradually getting a fever in a hospital ward at night, your uneven breath and accelerating heart rate eating into your senses, and then unable to bear the inflammation caused by mucus, fleeing the room.

Perhaps you'll at least learn that all the works I've released into the world are a product of piled-up despair and excitement.

[Retweeting Tesroset Live highlights] If you're wondering "what are you doing as a Vtuber?", just take a look at this, and you'll have no idea what I'm doing.

RT @kagura_suzu So Love Ward's in Just Dance, so I listened to it in the first time in forever, and it was such a tragic love song I cried.
I made her cry...

I think it's probably because no one can influence other people like that, so the last freedom left to you is to cry and scream.

No matter how much you cry or scream, you can't do anything about how someone else feels, yet you tend to cry and scream anyway.

I like that scene in One Piece where Luffy has an outburst like "What're you doing flippantly promoting yourself in the replies of a viral tweet from someone who isn't even your crew?!"

My theory is that in the moment you're deciding what to choose from a restaurant menu, as many universes as there are menu items are born. In the universe where I picked soba, I'm currently regretting not picking tempura.

The woman who, unable to forget the flavor of the soba she ate yesterday, goes to the soba place for the second day in a row and orders tempura.

Don't you wanna be like "Yep, present me wins! Present me is stronger! Flawless victory!"???

I owe my present self to my past self, but also, part of me doesn't like that and makes songs out of a desire to show past me who's boss.

Keeping up the same thing with the same conviction is super important, and I want to keep to that. But I think the ideal is to keep changing to match how the times change... And I want to meet lots of new fans!!

That's why I feel like I need to always be stopping to consider what I can do in the current era, and lately I've had thoughts about how since the times and values are changing, I can't keep taking the same old approaches. Vtubing is something I started out of that mindset, so I want to do my best with it.

Though I think no matter what era you're in, there are things you admittedly can't fight against, it's probably smart to approach it like "I'll make use of the parts of this era that are advantageous to me!" If you only focus on irrationalities you can't change on your own power, you'll just make yourself depressed.

Seriously, this. And that's exactly why around 10 years or so ago, a lot of people complained about amateurs entering the commercial world, and thinking about that now, it was a super irrational thing to make a fuss about... No one's a pro from the start.

RT @masha_aq As someone familiar with old NicoNico, this is roughly how I picture the way things have changed for creators. The result of the net maturing and becoming a place where people can directly sell their talents and skills is that everyone's started to try their hand at it. Looking at the net as a whole, I think things are more intense now.

[Image of two triangles, with an upward axis on the side labeled "Quality of Work (in the sense of "can it make money"). The first triangle, "'Bout 10 Years Ago," is almost entirely "play (2ch, Nico)" on the bottom, with a small top section for "commercial (pro, merch)." The second triangle, "Now," has a relatively small "play (Nico)" section on the bottom, with arrows for "getting skilled" pointing into a much larger "commercial (pro, merch, doujin, social media, Vtubing, YouTube, etc...)" section.]