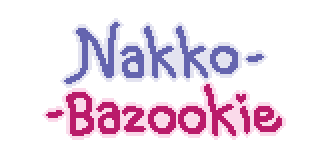 Nakko-Bazookie is a rocketjumping platformer by vgperson. It is the sequel to Nakko Rokkit: Tsuu-Ki, but doesn't share too much beyond the theme (ROCKETS).

Nakko, inexplicably back on her home planet Ears, falls in love with a talking bazooka named Bazookie.
But tragedy strikes the couple when one day, the power of rockets is sealed by a mysterious witch!
Now it's up to Nakko and Bazookie to go all over and under Ears to get back what is rocketfully theirs!


Download Nakko-Bazookie
You can also support this game on itch.io.

Supported Platforms
This game is for Windows only; I have no real way of making a native Mac version. To play on Mac, you can try a general-purpose tool like WineBottler.

On Windows 10, the game may fail to start (nothing happens when run). If so, ensure DirectPlay is installed. Go to Control Panel, then Programs and Features. Click "Turn Windows features on or off." There, look under Legacy Components and check DirectPlay. Run the game again, and install DirectPlay when prompted.

A guide on where to find all 75 of the collectible Rox. Be sure to collect as many as you can so you can trade them in for hearts later!

1. On the screen before Topsy Treeclumps. Rocket up onto the upper platform on the right.

2. On top of the tower of metal blocks on the path to Splashy Swirlpool. You need either the Ballisty Blaster or the Repeato Rocket; your rocket jumps are just a block of height too short otherwise.

3. On the screen before Splashy Swirlpool, at the top of the waterfall. Jump up there once you have Repeato Rocket.

1. On the left side of the second screen. Avoid the Tweetopsys to climb up to it.

2. On the third screen, jump past the top of the screen to find a Rox on the screen above.

3. Across a gap on the third screen. Blast yourself across, or just double jump.

4. Protected by a Tweetopsy on the fourth screen (with the spike-covered treetrunks). Try to shoot it when it's off its guard, or hop over it.

5. Climb atop the treetrunks on the fourth screen and head left. Climb up the platforms you find to reach a Rox.

6. In the top-right of the fifth screen (where you first find a SuggestiBlock). Fire down on the SuggestiBlock to ride it upward, then fire right at it to ride it across.

7. Before the boss room, drop down the pit to the left. (You can blast yourself back out, but you can also take the SuggestiBlock down with you to be safe.)

1. Clearly visible on the first screen. Just jump for it.

2. On the first screen, instead of going around to the top, go off the right in the lower area to find an alcove with a Rox on the next screen.

3. At the top-right of the second screen (where you begin descending platforms). Just jump high.

4. Instead of going down the left way, keep to the right when dropping down the second screen to reach the small area with the Rox in the corner of the next. Do a high rocket jump to safely back it back left over the spikes.

5. Protected by Vulcannos on the fourth screen. Secretly, you can just get on the upper platforms and hold Right just after they fire, and you'll grab the Rox and fall right into a safe place.

6. On the right of the fifth screen (with the two Podomews jumping toward each other). Shoot the pot up top all the way right to make a safe platform in the lava.

7. When dropping down on the fifth screen, hold right and jump over to the platforms at the bottom.

1. On the screen before Roastlava Ravine, in the upper-left. Climb up the footholds on the left side.

2. High on a platform in the upper-right on the screen with the first Landsharks.

3. Behind switch blocks, at the top of the screen with the big pool with Squittens swimming. Stand over on the right and angle your shot (i.e. fire straight left, hold the button until it reaches) to hit the red switch, which will drop a pot on the pressure switch below.

4. Down in one of the tall vertical pools right after dropping a pot down into some water. Say hi to the Puddlemew! ...And the seemingly-trapped Landshark!

5. In the top-left of the screen with several tall vertical pools. Watch out for the Landsharks!

6. High up in the room before the boss, above the middle platform in the series of three.

7. High up in the boss's screen. Rocket jump up to the right of the boss arena and climb!

1. High up above the first Rokor. Use it as a platform if you wish, it doesn't mind.

2. Across spikes on the screen with the first Rokors. Shoot a missile toward it to make it freeze up and become a safe platform.

3. On the right side as you drop down after going back up and down a screen.

4. Protected by Vulcannos on the left side of the first screen of the Dark Cavernos. Try to junp over the shots of the one on the bottom and not get hit by the slower-shooting top one.

5. On the right side of the screen with all the destructible terrain. Watch out for the Evacbats who thoughtfully made their home in a place semi-protected by missile redirectors!

6. On the right of the screen with all the Rokors on spike platforms. The platforms below make it easy to direct a missile toward the Rokor and jump onto it to reach the Rox.

7. In the screen with all the redirecting arrows, hit the red button to blast open the way to the Rox in the bottom-right. But don't let any missiles touch the redirectors, or they'll be guided to a pot that will block off the Rox! (You'll probably inadvertently shoot a missile into them near the end - when that happens, just run for it!)

1. Across the spikes at the bottom of the first screen. The Laseer is unavoidable, but the Sirensongs shouldn't be too much bother as you jump across the lower pendulums.

2. In the top-right of the second screen (which introduces the screws and nuts). Be careful of firing down and tripping the Laseer below; if you want to avoid doing so, try getting the pendulum to block your missile.

3. Protected by switch blocks in the third screen. Push the pot at the beginning of the screen down below, then shoot it all the way right onto the switch in the spikes. (The other pot is a red herring - alas, it's impossible to keep it on the switch.)

4. When you find a nut at the bottom of a tall screw with no apparent purpose and lots of space above it, take it to the bottom, then rapidly fire down-left to get a huge boost up into the screen above. (You can also just do a more standard rocket jump from the top of the screw, but c'mon.)

5. Across a bunch of wacky pendulums swinging in the sight of a Laseer. Honestly, tripping the alarm here probably isn't that big a deal, but it's fun to try not to, right?

6. On the screen with the Laseer with a switch block in its sight, don't shoot the pot off the switch, because the Rox is behind switch blocks over to the right. (I tricked you! You were tricked!)

7. In the "clock room" with the super-long pendulum, at the top-right. It's recommended you wait for the pendulum to come around clockwise before you jump back on.

1. After getting reverse gravity on the second screen, work your way to the top-left to get the Rox on the first screen.

2. Direct the SuggestiBlock right and jump by right as it blocks the Lasear. Go left to get the Rox, then hit the button to get back on track.

3. In the bottom-left of the fourth screen, among a whole bunch of Lasears. Uh... Try not to hit any of them.

5. Behind two parallel Lasears. Their beams don't extend into the screen below, so you can jump "over" them. Of course, though, the horizontal Lasear below also limits the height of your jumps.

6. On the same screen, in an alcove that's a tight fit due to the Lasear below it. Approach it from above with reverse gravity, and watch out for the Bopowems!

7. In the laser maze before the boss, drop the first pot and push it off to the left. Drop the second and push it right twice, and it'll fall on top of the first. Go to the bottom-right, shoot the Bopowem to get it away from the entrance, and get the Rox. ...And don't touch the pots!

1 to 30. After beating each of the three underground areas, Doggo digs up a Dungeyon accessible from the in-between screens of the shaft. At the end of each is 10 Rox. But how to beat them is up to you to figure out!


(I sure am a strong, independent woman cat.)