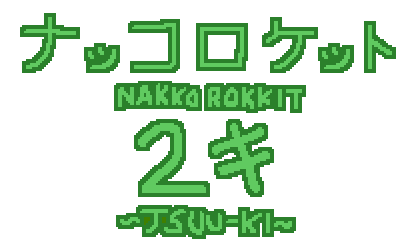 Nakko Rokkit: Tsuu-Ki is a rocket rocket rocket platformer by vgperson, where you're a cat with a rocket pack. It is the (totally different) sequel to the (fictional) bootleg game NaKKo ROKK!! it.

nakko has knock down all opponent.
but one opponent remain... that is EARS GRAVITY.
find rocket and get velocity to MUNE. and beat doggo again maybe!!

Supported Platforms
This game is for Windows only; I have no real way of making a native Mac version. To play on Mac, you can try a general-purpose tool like WineBottler.

On Windows 10, the game may fail to start (nothing happens when run). If so, ensure DirectPlay is installed. Go to Control Panel, then Programs and Features. Click "Turn Windows features on or off." There, look under Legacy Components and check DirectPlay. Run the game again, and install DirectPlay when prompted.