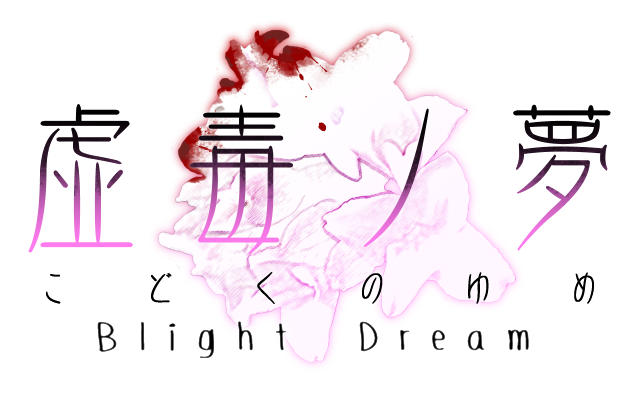 It takes place several years after Blank Dream, but is not closely related and can be played independently of it.

A traumatic accident renders Michiru Orihara unable to retain any new memories for more than a day.
She eventually learns to preserve them using a notebook, but becomes curious about the gap in her memory following the accident.
Michiru starts to look for clues around the house, but it seems her brother would prefer that she didn't...

Murder and blood.
A single, frequently-repeated mild jumpscare (somewhat startling image and "stinger" sound).
(It's most often associated with making a mistake, though there are a number of unavoidable instances as well.)
Explorations of the hardship that results from the protagonist's memory disorder.
Mentions of suicide.


Download Blight Dream 1.00 | (Mirror)
(Chrome may falsely flag the download as malicious, but it's safe to ignore.)

You must have Microsoft .NET Framework 4.5 or newer installed to play.
Download .NET

Supported Platforms
The game's engine is made for Windows only, with no native support for other platforms. To play on Mac, you can try a general-purpose tool like WineBottler.

An fairly detailed explanation of mechanics (spoilery if you want to figure it out yourself), and a guide through the game. Click or highlight the black boxes to show hidden text.

Yuu has six basic states he goes into randomly when the time of day changes.

When Yuu is out of the house, you'll get a "the house feels quiet" message.
You can check the front door to see if it's unchained and his shoes aren't there.
However, he can also be lurking somewhere, which shows "the house feels quiet" message but is not safe.
In this case, the front door will still have the chain and his shoes will still be there.

You can check if Yuu is smoking on the balcony by peeking out the window in Michiru's room or the living room.

Time passes by one "step" each time you inspect an object or change rooms. Each "time of day" lasts 10 steps.

You can check if Yuu is in the restroom by knocking on the restroom door.
But if he goes "..." (5 "steps" after time-of-day change), he's ready to exit, so it's not safe.

You can check if Yuu is taking a shower by listening in outside the washroom.
But if he goes "..." at the shower door (7 "steps" after time-of-day change), he's ready to exit, so it's not safe.

When Yuu needs to be (or not be) in a certain place, it's easiest to sleep in your room, then check where he is.

Every day you go without recording a Memory Shard adds to a counter, reset when you do get one.
You'll get messages about Michiru "forgetting something," and if you go ten days in a row, you'll get a game over.

In each search segment, your basic goal is to gather all the Memory Shards, then the story will advance.

Shard 1: Going Outside
Attempt to leave the house from the front door (gray door at the far end of the hallway).

Shard 2: News on TV
While Yuu is anywhere but the living room:
Check the pile of boxes in the living room (next to the door to Yuu's room) for the TV remote.

Get to the vending machines.
Head for the bottom-left corner first, then go up and down the tiny stairs the person is standing between.
From there, follow the path toward the right.

Shard 1: Daphnes
While Yuu isn't on the balcony:
Look at the flowers on the right side of the balcony and think about them more.

Shard 2: Hidden Memories
Inspect the shelves in the living room to find a photo.

While Yuu is anywhere but the living room:
Enter his room from the living room.
Go to his computer and input 0320.
(This choice only appears if you've looked at the hospital photo on this day.)

Shard 3: Bedroom Key
While Yuu is in the shower, and isn't done (saying "..."):
Enter the washroom and check his clothes on the washing machine.
Choose to not write about the key and just keep it in a drawer, or else you'll have to get it again.

Walk all the way to the end.
Turn back around and walk toward the last painting.

You can't leave your room via the door, so go out to the balcony and into the living room.
Start cooking at the kitchen counter. Then send Yuu out shopping.
Go to the bedroom door (the brown door in the hallway) and open it.
Open the dresser.

1. A car accident
2. I was put in Mashiba Hospital
3. I started the Memory Notebook, Nurse Takanashi recommended it, To remember Mirai
4. Seeing "Blight", The painter Hinohara, I feared losing my memory
5. The serial murders
6. Say no to all choices except the last.

Translation Note
(This contains spoilers for the game. Only read after you've gotten the ending.)

The game's title is, naturally, very similar to the title of Blank Dream.
It too has the kanji 虚 (utsuro, hollow), but this time is combined with 毒 (doku, poison).

This isn't an actual word, but "hollow poison" basically describes of the concept of being "poisoned by loss."
Blight seemed to fit well for this, and it's even very similar to "Blank," so it conveys that connection.

Also, the title is read as "kodoku," which means "loneliness."
This obviously ties into the game as well, and makes some sense from Mishiro's perspective too.
That part's not really incorporated in the English title, though it does have an added "light/bright" implication.