(´・ω・`) The other day, my pajamas caught on some machinery,
and so they got terribly ripped. Rrrrrip.

As such, I promptly went out to buy some new pajamas!

(´ミωミ`)∴：＊ Sleeping in pajamas always gets me nice and tired, so...

I'm more of a pajama guy than wearing sweatshirts or bathrobes... ♪

Hey, wha? There's another tag here with something written on it... 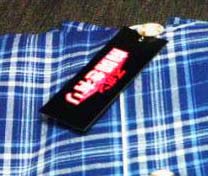 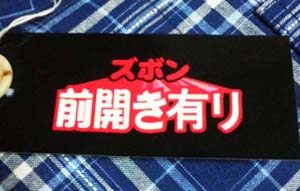 What an astounding proclamation.

And the Open In Front part even has a three-dimensional effect on it...

I'm sure the truth of the "Open In Front" is,

they were trying to imply they were "bigger" than "someone"...

But really, when you give something this much forcefulness...

It starts to resemble a movie logo.


Does the presence of a front-flap have anything to do with fantasy movies?

What exactly is going on in the Kingdom of Narnia...?!?!


Could this mystery possibly be brought to light in the fourth chapter of the Narnia series...?!? * NOPE


With that said, Sasakure.UK shall wear his pajamas that open in front,
while eagerly awaiting news on continuations to the Narnia series!!!
└(´⌒ω⌒`)┘ LET'S NARNIA!!!!


▽ Meeting A Friend the Other Day.

My friend is a fashion-conscious nice-guy (who SAYS that anymore?) who tends to wear some rather odd clothing.
But the other day, he had some shoes on that looked something like this. 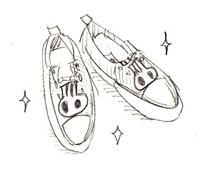 Huge skulls on both feet. Glaring at me.

What did he want to emphasize so as to choose this design?

W-Wait a second...
All of a sudden, I just realized the answer.


Skulls are known the world over to signify "death."


So if he's wearing these shoes...

Then my friend's feet...

"BEWARE US, FOR WE EMIT A DEATHLY ODOR."

Is what the feet are saying. Implicitly.

There are many facts I have yet to learn about the world of fashion...


...Is this the way in which people slowly become adults...? * NOT REALLY