My soybeans have grown a fair bit, so I was going to post pictures, but I've been posting nothing but food and plants lately [obviously, I haven't been translating those posts], so I'm finally going to talk about games again.
The soybeans will be next time.

I went to the RPG Maker site for the first time in a while and saw "RPG Maker VX Ace Lite," so I gave it a download.
Apparently it was created for some kind of independent game festival [It's Our Revolution! was part of this], but since it's fine to use for anything if you follow the rules, I played around with it.

Ib and Mary in the character creation tool...
Doesn't look very much like them.

I have to say, it's rather interesting to work with.

My first thought when I first saw VX Ace was "Wow, what a high resolution..."
The biggest difference from 2000 seems to be the ability to use scripts. Though there's certainly more than that.

First things first, it looks very pretty.
Every little one of the premade graphics is so detailed. 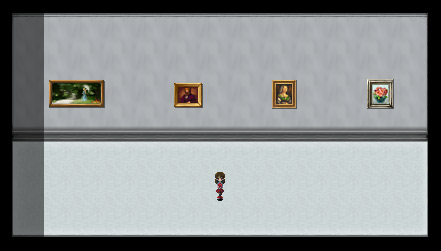 A gallery-esque map created in VX Ace.
When you put Ib's sprite in there, she looks so very small.

I thought I might make some of my own graphics, but the map tiles are four times the size...
It would no doubt take a long time to create all the graphics myself.
But its beauty is in an entirely different league from 2000.
Though I do feel that pixelly pixels have a unique flavor to them.

I made some comparison screenshots.
This is the current version of Ib. 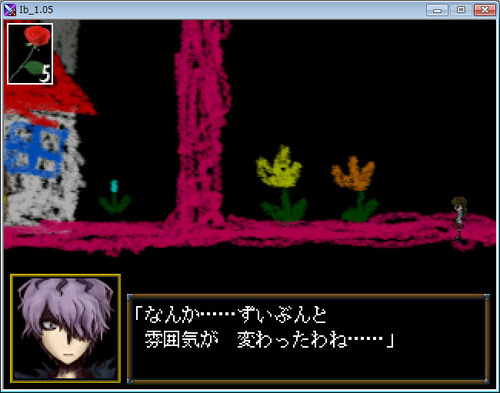 The screen is 320x240 scaled up to 640x480, so the resolution is somewhat coarse.
Game-wise, I personally feel this is the best size to play at.
Garry's face sprite and the background look like they're blurred.

And below is a mockup of Ib in VX Ace.
* This scene does not exist. 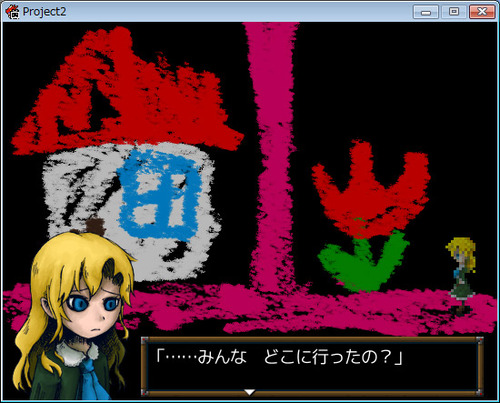 A considerably clearer picture.
Though it may not be the best example since this background isn't made of tiles, it can be displayed practically without degradation.
Additionally, I can use masks to have nice-looking portraits of the characters.
W-Wait, that tulip is HUGE!

I didn't try anything with scripts, but it appears you can edit even the most fundamental bits if you wish.
However, the graphics... If I'm going to make a map entirely by myself, it would be quite trying to do so with a resolution greater than 2000's. Character sprites would be no problem, though.
I do also have the option of connecting four tiles to make one. (I tried it.)
Hmm, it's hard to say...

I would kind of like try to making something in VX Ace... I wish I had about 2 months of summer vacation.
Actually, I feel like I said that same thing last year.

Anyway, the Lite version is free for anyone to download, so try it if you're interested.
You're apparently fine releasing any games made in it. (Just no selling.)