Wow, come to think of it, we're coming up on 3 years since Ib's release!
I want to do something for it, but what can I do?
I don't have much time...

I already did a character popularity poll.
That was a good one. I even had fun tallying the results... The fan participation aspect made it fresh.
I briefly considered, for the two-year anniversary, "Have fans send in pictures, make them into pixels myself, and release it as a game," but the workload seemed too much, so I scrapped it.

Besides that, I also had a few thoughts about a short game in which Ib becomes an RPG.
Rather than puzzles, you fight with your might (?). Of course, the enemies would be Guertena artwork, and could join your party.
Making those works which were always your enemies into allies would be interesting to be sure, but the workload (etc.)

No, I guess there's too much effort in games, so never mind that.
Maybe a lottery of free Ib merch for people who score high on an Ib quiz! No?
Hm, what should I do...

Miss Mary.
I'm satisfied with how doll-like I drew her. I'd like to draw Garry like this too. 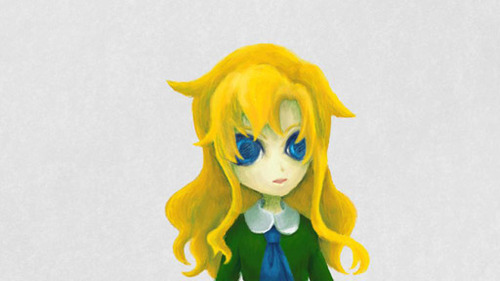