I'm tired of pixeling... I want to draw freely.
A picture of a weird fish, say.

That aside, this illustration is for the mug added to the Guertena Shop yesterday... or it was going to be, but the mugs were too small to make it out.
The cup design is the same as the tote bag. It holds... perhaps hot cocoa. 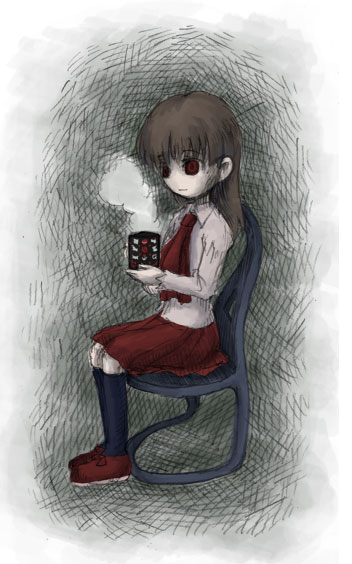 I'd love to drop such a crisp picture into the game as-is, but I know it wouldn't go very well.

I had a new idea for a game.
I'd like to try dropping most game elements and make a sort of controllable storybook.
No real battles or puzzle-solving, but rather changing the outcome through character dialogue and choices.
Being able to manipulate the characters is the key feature of games, so I feel like if well-utilized it could be very interesting. But I wonder.
Perhaps it's dicey... I'll keep it in storage for now.

Well, back to game work.