On horror, and a show I saw on TV earlier.
It may be a serious (?) post for once.

Read on if you wish.

There was this program called "The Terrors of World Heritage Sites" or something doing a special, and they had some guy who published a book called "Scary Art" as a commentator.
The point is, he said "The unknown is more frightening than anything." (Or something like that, I don't quite remember.)
I found myself agreeing with that comment.

When thinking up scary things for Ib, I thought over a lot of things and events which people feared, and the thing I supposed had to be scariest was "the unknown."
I think there was even a book that said that in the game... Forget where, though.
Anyway, these "unknowns" are the only horrors of our world which we can't possibly plan for and which leave us uncertain, because we're by definition not familiar with them, and so they're the scariest.
But once they become known, the fear subsides. We get used to it.

A number of emails I've gotten have asked about some of the basic mysteries of the game, but for reasons such as the above, I've chosen not to answer those questions.
When the origins of the fear are explained, I think that dramatically reduces the game's charm.
Especially for a game considered to be "horror."

...But come to think of it, aren't humans the only ones who enjoy horror as entertainment?
In that sense, humans are the most terrifying of all. 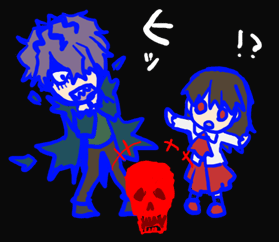