The Return of Playing with Face Sprites (from kouri's blog)

I poured some Beaujolais nouveau into a Guertena gallery glass.

It's awfully difficult to take a sufficiently pretty photo of wine, huh.
I couldn't do it very well.

That's right, I bought the new RPG Maker, so I quickly went to play with the face sprite creator tools.
It's pretty interesting!

Quite a few more parts were added in the full version.
I made a revenge attempt on the Ib characters.

Ib, Garry, and Mary.
I feel they're better than the previous ones.

Maybe I could make them look a bit better, but this is my personal limit.
I think both Marys are actually pretty good, don't you?

Her walk sprites aren't bad either. (Such as the curliness of her hair.) 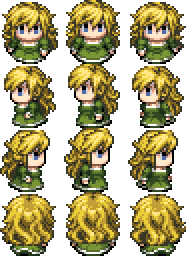 Of course, the most amusing function is the random creator.
As the name implies, it picks random parts to make characters in the blink of an eye, but, uh... 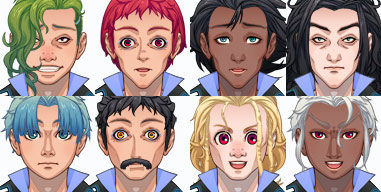 This is how it ends up.
The top-right two are okay, but the others have this lack of balance that makes me laugh. 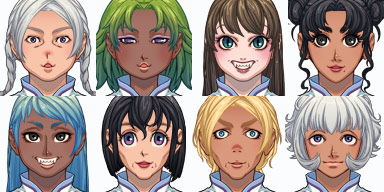 The second from the top-right has the same hair I used for Ib, yet fills me with immense terror.
I tried randomizing about 50 times, but very rarely could I get a cute one.

You might think I just picked out the weird ones,
but this is really all you get!

If anyone wants to make a cool or cute character, it's best that you choose the parts yourself.

But I thought how this could be handy for making random NPCs.
Since it thankfully makes walk sprites as well, its power could likely be demonstrated in cases when a lot of people are needed, like soldiers in a castle or merchants.
Oh, and you can also add things like elf ears, tattoos, and accessories.

Then again, even using it for randos would (in more ways than one) make them stand out too much, so it might be wise to make minor adjustments...
Well, it could be interesting. (laughs)