A Visit to the Arcade (from kouri's blog)

Whoaaa! Look at these! 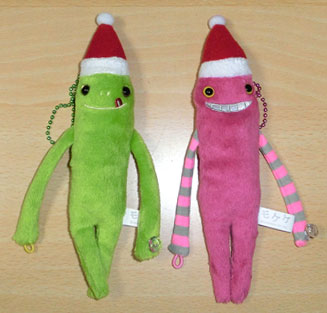 On a long-overdue visit to an arcade, I found these guys!

I don't really know what the characters are, but these two got me really stimulated.
I took a lot of pictures, which I shall introduce.

They were in a crane game.
I've been seeing them here and there for quite some time, but I don't remember their names or anything else.

I used to be a pro at crane games, but I've gotten worse as an adult and haven't won a single prize in recent years. But I managed to get these guys thanks to them being so near the exit hole!

Personally, the pink one's face left an impression on me.
Plus those Santa hats.

Ah, what a good smile. 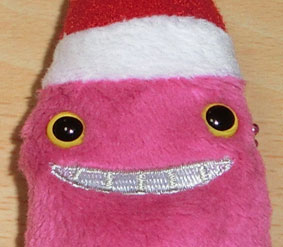 Maybe I'm uploading a bit too much.

The ends of the Mokeke's ams had buttons so you could attach their hands together. 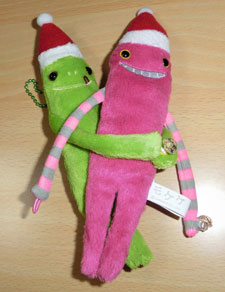 ^ A failure of a Titanic pose. (The arms wouldn't spread out.)

I also got a photo of the spotted eel joining the gang. 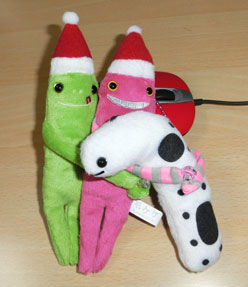 The red thing in the back is my mouse.
I like it. It's narrow and easy to hold.

I saw how they fit in an Ib tote bag, too. 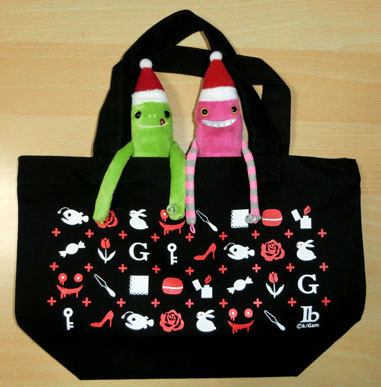 Oh yes, this tote bag started being sold yesterday.
It's on Animate. Buy it if you like. And put your own Mokeke in.

Hmm, I think I've taken enough photos here.
Actually, I believe there was another bigger Mokeke, but I'm bad at crane games where you have to grab much larger prizes.
They're too heavy for the crane to move an inch with them...

I spent about 1000 yen getting these, but I'm glad I could at least win a prize again.
Tomorrow (today) is coming up fast, so that's all for now. 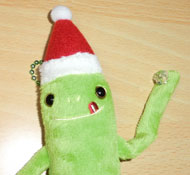