Thoughts on the Year (from kouri's blog) 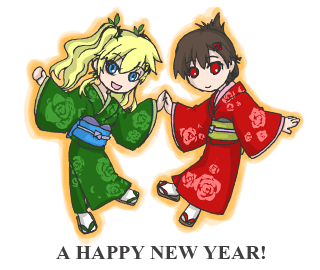 Whew, I'm finally done working.
Since it's now the end of the year, I'll write my thoughts on the whole thing.

2012 was a busy year, in short. Well, yes, it's busy still.
It goes without saying that Ib was the cause, but I've also come to know a lot of people because of it.
That may be the most significant thing I "got" from Ib.

Other than that, all this stuff on NicoNico Douga and doujin events and so on... opportunities I'd never experienced before sprung forth, and made me so busy it brought me to my physical and mental limits, and I really felt like I was going to die, but I managed to survive the year.

However, that makes it clear just how many people have played Ib, and I'm very glad for that.
Since I've been going it alone, and all I did was make a game, put it on Vector, and make a home page - since that's all I did, the fact that Ib has spread so much as to have events and merchandise is no doubt all thanks to the fans.

I'm glad that as long as there are fans, things will continue to expand in some way or another.
Well, I think I'd like to make things whether I had fans or not... *laughs*

Next year... Well, I'd sure like to make my next project then.
Something like Ib, well, it's hard to explain... I didn't pay much heed to outside influences and just worked on it freely with the things I wanted to see, and then just released it. That's what I'd always want.
If you aren't making what you want to, then there's not much point in making a free game.

That how I feel, anyway.

Also, thank you very much for your supportive emails.
I'm so glad for them! I appreciate even messages that have nothing to do with games! *laughs*
I've even talked with other game developers and gotten their viewpoints, which really stimulates me. It's a great thing to have.
Of course, I'm thankful to those who reported bugs as well!

So in short, I'll be aiming to do what I want to do at my own pace.
I hope it's a good year for us both!