Wait, it's WHAT backwards?!

(Spoilers for the entire game.)

All character names were left exactly as-is. As soon as I ran into names like Emalf I figured, yeah, we're just sticking with this. Also, Ivlis is indeed differentiated from "Iblis."

Mogeko's website has English spellings for all their characters (of which there are many - there may be slight spoilers on the site if you don't want to see characters from Mogeko's other works, I guess).

Most names were shown in-game in English anyway, though Reficul didn't get a screen with her name (of course, uh) and Grora's name is partially obscured. Also DJ Met.

Also, Ater and Albus mean "black" and "white" in Latin, so... I don't know if Mogeko named her "Arbus" instead intentionally or not.


It's honestly hard to tell some of the genders of people in Mogeko's games - some look quite androgynous, and especially if they're minor, may never be referred to by anything that would indicate their gender.

Lowrie and Greif got the worst of the gender uncertainty, as both are only referred to with "sensei" and have very minor roles.

I try to be very careful about this, but avoiding any gender references at all is just plain awkward, especially if the character's gender was never "meant" to be a mystery.

But, in the end, I asked Mogeko (albeit after release) for confirmation. I was thankfully right about everyone, with the exception of Etihw; they were meant to be non-binary, a mistake I eventually corrected.


In Japanese, different words were used for the "garden" in the title/name of the world and the "flower garden." So, uh, it's a little less confusing.

Blancblack Castle's Japanese name simply meant "Black-White Castle," though does have a nice ring to it: Kuroshiro no Shiro. The other area names are straightforward, though Cave Forest and River Forest are literally "Forest with a Cave" and "Forest with a River."


Etihw uses the typically-masculine boku and speaks fairly "loosely," whereas Kcalb uses watashi and is a bit more formal. Opposites as usual. But of course, Kcalb generally just comes off as a grumpy old man, especially due to his interactions with Etihw.

Emalf's effin' speech quirks don't necessarily "correspond" to anything, but he does end his sentences with "ssu" and stuff a lot.

I... probably played up the repetition between Ater and Arbus slightly more than the original did, but it was definitely there.


The "Holey Sheet" armor was a pun on kami meaning both "god" and "paper." And, well, you can still interpret it as Etihw giving you a piece of paper to protect yourself...

The kami pun also came up with one of the random notes in a Gray Village house, changed to "Please, make piece with paper. You're tearing me apart." It said "make peace with God," but replaced the words with homonyms. "Prepare: Two meat, your maker." was a similar case.


It would be a lot to go through all the little ways I translated puns and speaking quirks (especially the one-off things that don't really mean anything), so here are some notable ones.

Lastly, not a translation note, but something you can only see in the editor. In the corner of some of the "path to Blancblack Castle" maps, "unko" (poop) is spelled out in tiles. (We can probably blame Wodahs, he's the gardener, right?)

When you come back at the end of the game and everything is on fire, there are added flames which prefix it with "geri," for "diarrhea." Classy.

Now for some things most people probably didn't catch just playing through the game. Remember this image when they first talk about the history of their world? 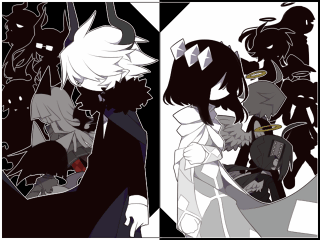 The unsilhouetted characters all make proper appearances in the game. But who are the rest? Well... they're the kids' "ancestors."

Okay, so that's neat. But where are they now?

Oh, right. Kcalb destroyed the world. Which means they probably died, and were by some means reborn as the children we know now. Hooray! (In later versions of the game, you can find the ancestors' graves among the many graves in the Graveyard.)

There are many other things to be discovered "related" to The Gray Garden, though a lot of it has nothing to do with the game itself - these things are more likely to come up in the prequel, the sequel, or entire other series of Mogeko's. (Obviously the prequel would focus on the ancestors, and the sequel may expand out into more worlds.)

For example, Reficul is the Devil of another world, married to a snake lady named Sin, and we know quite a few of her world's residents besides Lowrie, but none of that relates to the events of The Gray Garden. And Ivlis's flame world has a god, Siralos, but he doesn't get so much as alluded to in TGG; apparently Siralos doesn't really care what Ivlis does.

Still, it is probably worth mentioning that there's a clear rivalry (or at least one-sided insulting) between Satanick (character 55) and Ivlis (character 110) - but according to Mogeko, they only meet after the events of The Gray Garden. (Might not necessarily mean there couldn't have been indirect contact before that.) There's also this passing angel...