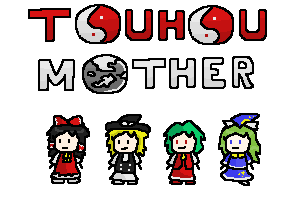 "This game ⑨s!" ~ Nintendo Power
"For humans, youkai, and even your fairy sister." ~ Famitsu
"Strange, funny, and heartrending." ~ Shigesato Itoi (on Mother 3)

• Touhou Mother is an RPG Maker 2000 game created by S-tele in collaboration with mao, ALiCE TAiL, Suama, and others. It is a fangame of the Mother series with Touhou characters. And it's very strange.

It's an ordinary day in Gensokyo, which is to say that everyone's bored.
Reimu and Marisa head out to visit Yuka, and while dealing with a fairy problem, they hear a loud crash.
Nearby, they find a meteorite, an alien, and a certain boy who's wandered into their world...

• This game is continued by its sequel, Return of Touhou Mother.


• Download Touhou Mother | (Mirror)
(Chrome may falsely flag the download as malicious, but it's safe to ignore.)

• Supported Platforms
The game's engine is made for Windows only, with no native support for other platforms.

If the font doesn't seem correct, download and install the MS Gothic font.


• MIDI Soundtrack
(Note that the names are based on filenames; the official soundtrack below has different names for most of them.)

• Official MP3 Soundtrack
(If the link is broken, try this.)


• Final Script
This is a script of all dialogue from the latest translation. It also includes Yuka's smashes and Battle Memory descriptions (some by mao, but many written by me).

• A "Video Saves" folder is included in the download. These saves are at the start of each video, or at least to the nearest save point. RPG Maker only has 15 save slots, so you'll have to rename 16 and up.

The saves were made by running through the game in my self-created "easy mode" where enemies die instantly. Initially, I "fought" almost every enemy I saw, but got lazier about that later. This process may or may not have resulted in decent levels.

• Oh, about the graphics. Shortly before S posted the finale, someone on the BBS asked S permission to redo the character sprites. S said that was okay even if he wasn't going to use them, so they went ahead and did it. And to be honest, they look a lot better than the originals.

Much later, MikoSpark and Shadow443 redid a large portion of the enemy graphics. Why am I telling you this? Because I decided to make both of these improved graphic sets the defaults. (The originals are included for posterity, though; check GraphicsReadme for instructions on using them.)

• Do gamepads work?
Yes, gamepads can be used. It only uses a few buttons, so there should be no problem with that.

• What's the difference between difficulties?
Just like Touhou, it goes from Easy, the easiest, to Lunatic, the impossible-est. Higher difficulties will make the enemies stronger. Obviously. It also speeds up the HP roll. The difficulty in the videos is Normal. On difficulties Hard and above, you'll get Subweapons around the middle of the game.

• I'm stuck.
Reload a previous save. You should save at all opportunities. Oh, and you shouldn't save in just one slot, either.

You might have a lot of trouble going through the poison in Muenzuka. There isn't anywhere to buy items in Muenzuka, and the poison will quickly drain your HP. Make sure you're ready with lots of items in reserve before you go there.

• I can't beat those "di" guys.
That's okay. It's to be expected. Only by the endgame should you be able to beat them.

• Eientei sucks.
That's even less of a question than any of those above, but, yes. It kinda does. Here's a map.

Letters signify connected doors. EN is where you start. Both EN and EX lead back to Reisen. DC is the Death Crimson room. GS is the Guilloscreen enemy. K1 and K2 are linked normally, but the "arrow-K1" door is a one-way warp to to K1, which is weird and possibly a mistake.