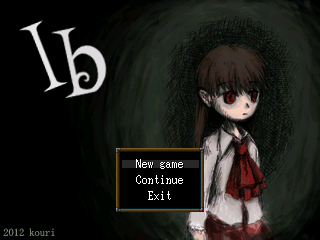 Ib (pronounced "Eeb," similar to "Eve") is a freeware horror adventure game by kouri made in RPG Maker 2000.

A young girl named Ib visits an art gallery with her parents.
While observing the many exhibits, she suddenly realizes she is alone.
And in her search for others, she finds things awry in the gallery...

The game is focused on exploration and puzzle-solving. There are no battles, and it does not demand quick reflexes. It's designed to be accessible to all kinds of players, so enjoy.

Minor jumpscares.
A few instances of blood (not very detailed at all).
Mention of hanging, and a person hanged offscreen.
Very low-resolution nudity on one painting.

Supported Platforms
The game's engine is made for Windows only, with no native support for other platforms.

Videos and live streams are allowed. However, kouri has forbidden making any form of profit from gameplay videos.

Do not modify, misappropriate, or redistribute any images or music from the game. In particular, do not reupload the music online, as it was made by others and is used in the game with permission.

Most fanworks are allowed, but creating fangames is not (sequels, offshoots, usage of the characters in general). Similarly, modification of the original game is not allowed (beyond the purposes of translation).

Fanworks can be sold only if kept to a "hobbyist" scope (this includes conventions). They should also not use the official logo nor pixel art from the game, or be easily mistaken for official merchandise.

If the font doesn't seem correct, download and install the MS Mincho font.

All the music in the game can be found in the Music folder. Below is a list of songs and their sources. Note that there are some spoilers, mostly with regard to where songs are used.

Do not reupload these songs elsewhere without permission from their respective creators.

The game has multiple endings, so I've compiled a guide on the factors that go into getting them.

This guide is extremely spoilery, so do NOT read this if you haven't beaten the game at least once. Even then, it's only recommended that you read this if you want to know exactly how to get the other endings and aren't willing to experiment on your own.

It does not give any puzzle hints or the like, so don't read it if you're just looking for those.

Doom Counter
If there are three or more points in this, things will go sour in the toy box.

These actions lead to doom:

= Violet Area =
• Pulling the rightmost cord in the cord room, which drops a mannequin or doll
• Kicking the persistent doll (instead of moving it aside)
• Failing the doll room (adds 2)


Garry Bond
If your bond is eight points or higher, you're able to get Promise of Reunion.

These actions add to your bond:

= Violet Area =
• Reading the diary in the rope maze near the beginning of the area
• Looking at the milk puzzle (regardless of your answer)
• Saying you're there or not there (not "..........") after the lights go out


Mary Affection
If Mary's affection for Ib is four points or higher, you're able to get Welcome to the World of Guertena.

These actions add to Mary's affection:

= Violet Area =
• See the "sinister painting" in hide and seek, as well as the Hanged Garry message; then, when you meet Mary, ask if she's okay before Garry does
• Agree that Red Eyes is cute or pettable
• Agree with Mary that Ib and her will be fine on their own

= Brown Area =
• Say you'd leave with Mary [Note: not useful, given the Doom Count requirement]
• Talk to Mary seven or more times in the brown area (while she follows you around after stabbing the mannequin)


Is Garry beyond saving...?

There are three requirements for this:
• See the "sinister painting" during hide and seek
• See the Hanged Garry message after kicking the mannequin head
• Have a Doom Count of five or more (after the doll room)

If all of these are fulfilled and you fail the doll room, Garry is too far gone to be saved.

If Mary's affection is less than four, you proceed to "A Painting's Demise." If it's four or more, you get "Welcome to the World of Guertena."


If Garry dies, you have two options:
• Go straight to the gallery to get "Together, Forever."

• After Mary is done with Garry's rose, go back and get Garry's lighter to burn Mary's painting. If you jump into the mural, you get "Forgotten Portrait." If you don't, or go with the fake Garry, you get "Ib All Alone."

In the Atelier at the end of the second-playthrough extra dungeon, you can get a variation of "Ib All Alone" by falling asleep, so long as Garry isn't there to stop Ib.

If Garry lives, there are two possibilites:
• Your bond is too low, Ib doesn't get to give Garry her handkerchief, Garry doesn't remember Ib, and you get "Memory's Crannies."

• Your bond is high enough, Ib gives Garry her handkerchief, and Garry remembers Ib, so you get "Promise of Reunion."

Going with the fake mother in either case, you get "Ib All Alone."


After a "good" ending (where Ib escapes), you have the option of continuing, which preserves knowledge of the endings and artworks you've seen. (A playthrough starting from "new game" will not have any memory of this.) When you reach the end of the game on a repeat playthrough, the dark gallery at the end has a path to an extra dungeon.

The Black Key at the end of this dungeon unlocks the True Guertena Exhibition. (You're presented with the option of going there after any "good" ending.) There, you can see all the artwork Ib has learned the names of.


Miscellaneous changes as a result of choices:

• Seeing the "sinister painting" of Ib (during hide and seek in the yellow area) results in seeing a hanged Ib in the lower-left of the sketchbook.

• Kicking the mannequin head in the mirror room makes more mannequin heads appear in general. The room with the poster about damaging exhibits has a hanged mannequin put in it. It fills the vase below with red paint/blood, which will make your rose wilt. Later, after the lights go out in the violet area, the mirror may show Garry with his head blotted out. Lastly, if Garry pulls the rightmost cord in the cord room, a mannequin head falls rather than a doll.

• Mary will only ask Ib the hypothetical "if there were only two" question if the Doom Count is at zero.

• Breaking all three mannequin heads in the brown area makes more appear in the main room. Later, it places a hanged Ib near the pink house in the sketchbook, though Garry doesn't see it.

• If you succeed in the doll room, Garry will go up the stairs himself and intercept Mary as she closes in on Ib. If you fail the doll room, Ib and Mary find Garry talking to the dolls/rabbits, but Ib snaps him out of it (maybe). However, he doesn't remember Mary's secret until they go up the stairs, Mary drops her rose, and he knocks her out.

• If Ib calls Red Eyes "cute" or "pettable," Mary will take this to be her opinion of the blue dolls and comment on it in the toy box while discussing the rose trade.

• If you have the Candy in the "Together, Forever" ending, Mary will eat it. If you took the Lighter (and ate the Candy to make room), Mary will say it's dangerous and take it away.

These posts contain spoilers for all aspects of the game. Only read them after you've beaten it fully.